Explore the Spookier Side of the Berkshires Here are a few of our favorite haunts for chills and thrills as a leadup to All Hallow’s Eve in the Berkshires!

On October 17, 1867, workers building the 4.75-mile Hoosac Tunnel straight through the Hoosac Mountain range, witnessed a horrifying accident. A candle ignited combustible fumes, causing an explosion and fire in a building constructed over a vertical exhaust tunnel known as the Central Shaft. The building burned and collapsed on top of 13 workers inside the tunnel. It was just one of the accidents that killed a total of 196 workers during the 24 years the tunnel was under construction. To the world, the Hoosac Tunnel was “the Gateway to the West,” connecting Boston with the interior of the country, but in the Berkshires, it was a gateway to something far more sinister. Closer to North Adams, rumors persisted among the workers of unexplained painful moans or visions of phantom miners in mist and snow – the restless dead claimed by the tunnel, which survivors called “The Bloody Pit.”

Our media has been saturated for centuries with stories of hauntings and monsters. Authors and artists have been wonderfully creative in crafting their stories, but the best ones always possess a kernel of truth. It’s easy to tell yourself it’s just a story until you’re crunching through the leaves and the sun is going down. How confident are you in your phone’s flashlight? How convinced are you that the noise you keep hearing is just the wind?

As we head into spooky season and you start breaking out the popcorn and horror movies, you might appreciate knowing that you can have your own (relatively safe) horror movie experience right here in the Berkshires. The Hoosac Tunnel is an active train route that can’t be visited, but ghost hunters can go searching for Old Coot, a forgotten Civil War veteran who died alone on Mount Greylock, or seek the specter of a Hessian soldier wandering the woods of Egremont. There are also some more concrete options for spooky fun. Here are a few of our favorite Berkshire haunts that you can visit to get your chills and thrills in the leadup to All Hallow’s Eve.

The Shakers began living in Hancock in 1780. Their community grew to a peak in the 1830s, and Shakers still lived on the property until 1959. If you ask some members of the current staff, some of those original Shakers may have never left. Peaceful by day, Hancock Shaker Village becomes Haunted Hancock on Thursday and Friday nights in October. Explore spaces normally off-limits to visitors. Learn about hard-carved gravestones stored in a basement and the mysterious apparition known as “the woman in black.” This 90-minute tour will include these and other tales, as well as the Shakers’ attitudes toward life, death, and spiritualism. Haunted Hancock is recommended for ages 12 and up.

Author Edith Wharton was just one member of the Gilded Age aristocrats to build a magnificent home (called “cottages” by the well-to-do who built them) in the Berkshires. Known for her novels including The Age of Innocence, Ethan Frome, and The House of Mirth, she also wrote many ghost stories. She claimed to be “haunted by formless horrors” in her youth, and her interest in the supernatural continued throughout her life. Wharton’s estate in Lenox, known as The Mount, may have been affected by her fascination with spirits. When it became a dormitory for a private school, students reported unexplained noises and other supernatural phenomena. When Shakespeare & Co used it as a dormitory after a period of vacancy, these eerie experiences were reported again, including apparitions of figures in period-specific dress. The SyFy network show Ghost Hunters recorded audio and visual phenomena during visits in 2009 and 2015. This month, visitors can participate in Ghost Tours for adults and children. Visitors may find their way to the pet cemetery atop a small hill, where several of Edith Wharton’s beloved pets are interred. You never know – Edith herself might be waiting for you – numerous witnesses report having seen her. 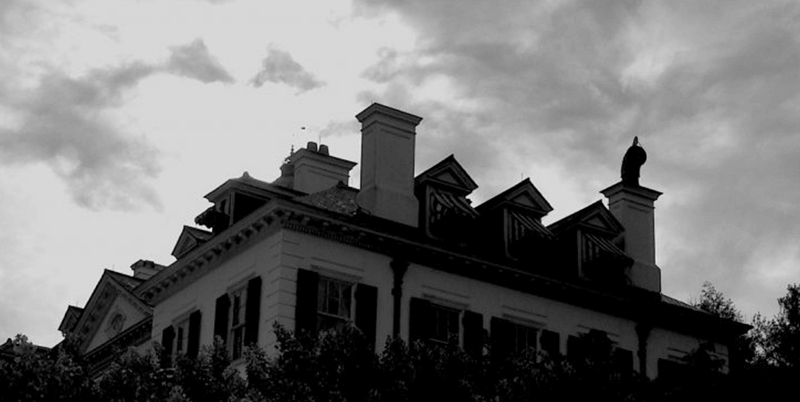 Maintained today by the Trustees of Reservations, Ashuntilly Gardens in Tyringham was once an estate of Egyptologist and politician Robb de Peyser Tytus, home to a mansion that came to be called The Marble Palace. Later, rumors would persist that Tytus’ exploration and excavation of ancient Egyptian ruins brought a curse upon his family. Built between 1910 and 1912, Tytus was unable to enjoy the Marble Palace for long – he died of tuberculosis in 1913 in Saranac Lake, NY. Though his widow Grace remarried, tragedy continued to follow the family. Ultimately, the property was sold to John McLennan Jr., Grace’s son. Finally, in April 1952, a fire burned hundreds of acres of the estate, including the Marble Palace itself. All that remains of the palace are the foundations, terrace, and four columns that were once at the center of the mansion. McLellan Jr. and his wife Katharine continued to live on the land, creating the gardens presently maintained by the Trustees, which received the land when Katharine died in 2017. You can visit the gardens daily 10am-5pm and the ruins from sunrise to sunset.

The greatest concentration of Berkshire County’s dearly departed are, of course, in its cemeteries. The Berkshire County Historical Society offers guided tours of Hillside Cemetery in North Adams on October 8 and Stockbridge Cemetery on October 15. In North Adams, you’ll find a number of luminaries, including a personal friend to two US presidents, an attorney who invented a railroad brake, and an eyewitness to Lincoln’s Gettysburg Address. A treasure hunt will accompany this tour, and children are welcome. The Stockbridge tour will see the burial places of Elizabeth Freeman, the first enslaved woman to sue and win her freedom under the Constitution of Massachusetts, the Sedgwick Family (whose patriarch, Theodore Sedgwick, helped Freeman sue for emancipation), and renowned illustrator and painter Norman Rockwell. You can register for these tours at berkshirehistory.org.

Another Gilded Age “cottage” in the Berkshires, Ventfort Hall was built for Sarah Morgan and her husband George, the sister of robber baron J.P. Morgan. The building was used as housing for Tanglewood music students, a summer hotel, a ballet summer camp, and community housing for a religious organization. It is now home to a Gilded Age museum…and, perhaps, something more. Doors on the third floor have been reported to open on their own. Reports of unexplained voices (including screaming), the strong and unexplained scent of perfume and cigars, visitors touched by something they cannot see, and the disembodied face of a woman descending the grand staircase round out the evidence to believe restless spirits haunt this home. If you wish to visit this haunted mansion in the safety of daylight, it is open daily 10am-4pm for self-guided tours. Those wishing to commune with spirits can join a psychic medium on October 8. The particularly brave can join ghost tours on October 9 and 30, or a four-hour paranormal investigation on October 8. Learn more at gildedage.org, if you dare.

Fall is perfect in the Berkshires. During the day, you can experience brilliant foliage, historic architecture, farm to table dining, outstanding cider doughnuts, pumpkin picking, world-class cultural venues, amazing shopping, and so much more. As the sun fades and night gathers, don’t let the fun stop there. Get out and explore the spookier side of these hills. You never know what you might find- a harmless thrill, or something altogether…more. We’re sure it will all work out for you, though. Scary stories are just stories, after all. Aren’t they?

Want to learn more about Berkshire hauntings? Check out Ghosts of the Berkshires by Robert Oakes, a researcher and storyteller and frequent leader of local ghost tours.

Return to the Berkshires Blog. The Best Places for Romance in the Berkshires Embracing the Joys of Winter

The cozy season is upon us. Here’s our guide for enjoying the comforts and simple pleasures of winter in the… The Berkshires is a snowy paradise that offers something for everyone! Spend the day on the slopes or exploring world-class… Fall in Love with Fall

It's a magical time of year #intheBerkshires! From the vibrant colors on the trees to the spice-tinged air, fall…